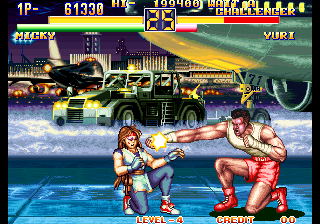 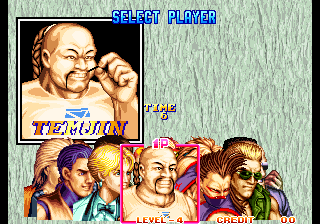 12 selectable characters are available in this martial arts fighting game, each showing progressive damage on their bodies during the fight.

TRIVIA
Ryuuko no Ken 2 was released in March 1994 in Japan.

This game is known outide Japan as Art of Fighting 2.

Geese Howard's guest appearance (see 'Tips And Tricks' section) tries to tie this game's story with the Fatal Fury games. Apparently, this game takes place a few years before the events occurred in "Fatal Fury - King of Fighters" since Geese looks quite young and uses a very different fighting style (instead of his trademark Aikido which he learned in Japan). Another fact is the special ending when you defeat Geese (you get to see when he gives the order to eliminate Jeff Bogard who happens to be Terry & Andy Bogard's father, before he heads to Japan to learn that country's martial art techniques). This fact also explains why Ryo Sakazaki is so damn powerful in his "Fatal Fury Special" appearance (after all, he was already a powerful & skilled fighter and has had more time than most of the Fatal Fury characters to brush up on his techniques!). Obviously, all these storyline details were ignored in the King of Fighters series for the sake of convenience (All the "Art of Fighting" characters should be way older than the Fatal Fury characters in that game!).

In Temjin's ending, Terry Bogard makes a guest appearance as a little boy!

TIPS AND TRICKS
Adjust the game difficulty setting up to level 8 in order to boost game's overall speed!

It may be downright cheap & silly, but if you successfully manage to throw an opponent and then hit him with a special move as he gets up, you will dizzy your opponent! This can be done over and over again with most characters...:/

Beat opponents with a special move at the end of the decisive round to see a special 'defeat' animation (some auto-combos & special moves that lift the opponent of the ground won't work though).
Defeat all opponents in two rounds only to fight a special battle against Fatal Fury's main villain & owner of Southtown: Geese Howard (Notice that it is possible to use continues & use different characters as long as you defeat your opponents in 'two rounds only'!).:)